We’re gonna go off on a tangent for a moment and talk kiddos and soccer. 🙂

If you haven’t figured it out by now, Rob and I are huge Timbers fans. We recently got off of the rather lengthy Season Ticket Holder Waitlist and became Season Ticket Holders for realsies, and we recently became inaugural Portland Thorns (the new National Women’s Soccer League) season ticket holders as well.

I’ve been asked a few times what we do with The Boy, especially now as the new season approaches. Well, we bring him along, and we stand in the Timbers Army (TA) section. And he loves it.

Since we don’t get out much (definition = ever), Timbers matches have been our go-to family outing from March until October. I’ve had a few parents ask how we handle bringing The Boy, so I’l share what we’ve learned along the way:

The Boy attended his first match at three months old. We probably could have brought him sooner, but when he was Colic Baby, Timbers matches were the last thing on our mind (sorry, Timbers!). But if you’ve got an awesome baby (I seriously envy you!), take them soon.

The sooner you take them to a match (or a large sporting event), the better. I’ve seen babies only weeks old at matches, and we probably could have brought The Boy, as no one would have heard him screaming (except us), but we were still trying to figure out what the hell we were doing when he was 0-3 months old. We’re still trying to figure out what we’re doing as parents, but we just fake it better now.

If you’ve waited, fret not, just follow the next tips (especially number 7), and you’ll have a little TA kiddo in no time.

My hearing is shot, Rob’s isn’t much better, and we’d prefer to have The Boy’s hearing to be intact as long as we can. Until he’s old enough to elect to blow out his ears with loud concerts, cranked headphones, and yes, loud sporting events, he’s going to wear some ear protection. We bought some earphones from Freddy’s in the hardware section, painted them green with white axes, and until The Boy doesn’t wear them anymore, Rob will probably keep adjusting the paint job every season, like this year. 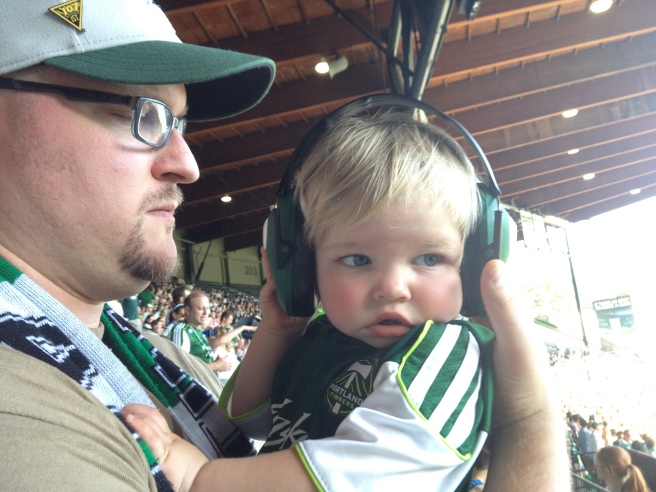 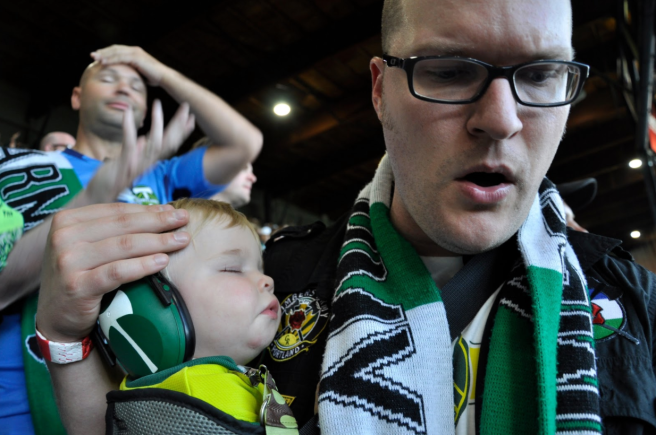 This also protected him from hearing the collective groans from plays from last season!

We had a little difficulty with The Boy keeping them on at first, but once he realized how much better the match was when the booming sound of the Timbers Army was muffled (ESPECIALLY when we scored; the sudden decibel jump scares him every time if he doesn’t have the earphones on), he didn’t fight them. If your little one resists, just keep trying.

Yes, I know they are super obvious, but be sure they are fed, hydrated, changed, warm or cool (depending on the weather), and dry. If one of those needs are not met, you’re gonna have a bad time.

Be prepared. But more prepared than if you’re just running to the store.

Rob and I typically stand in Section 208 (aka Del Boca Vista, an area of the Timbers Army notorious for the abundance of babies and kiddos), which has the advantage of being covered by the roof of Jeld-Wen Field. So when it rains, which is a lot (hello—it’s Portland), we tend to stay dry, which is huge for everyone’s happiness. At the beginning of the season, the weather tends to be reaaaallly cold for standing outside for three hours (we like to get there early), so even if we feel warm, we bundle up The Boy with a layer of snug pajamas underneath his clothes, in addition to a hat and blanket.

If it’s warm out, be prepared for it to be incredibly warm for baby. If they are old enough (as in, over one year old), be sure to bring an empty water bottle to fill once you get inside the stadium to help keep them hydrated. If they’re under one year old, be sure to bring breastmilk (or your bewbs, which is more convenient!), or formula to help keep your little one cool. Hint:: Guest Services is air-conditioned, has comfy chairs, and has a TV so you won’t miss a bit of the match if you need a break from the heat with your baby.

If you’re an avid sports fan like us, chances are you don’t actually USE your seat during the game. Which means you’re not only standing for an extended period of time, you’re also packing around your little one the whole time. Invest in a carrier, even if at first your little one hates it. We used the lillebaby sport carrier for Timbers matches. It was awesome; I loved that thing. I did a lot of research on baby carriers before we picked this one, and I liked the lillebaby sport one for the following reasons:

We used that carrier for almost a year and a half, and we have recently stopped using it because we’re both fine packing him around ourselves. And now Rob’s brother and his wife are using it for their four-month-old (see #1)

While Rob usually packed around The Boy for most of the match, I would take over at the half or we’d switch throughout the match. It gives us both opportunities to snuggle with our guy, and it gives the other a much-needed muscle break (and a break for obtaining beer!). 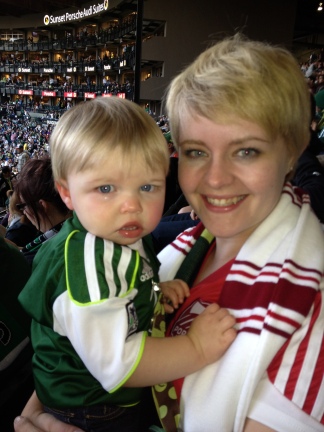 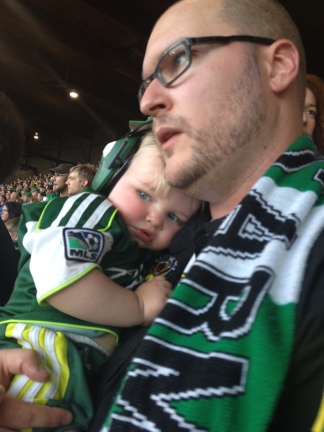 The Timbers Army is one of the lucky few in the MLS who have a General Admission section, so we can pretty much pick our seat. With that being said, don’t try to be the hardcore parent and bring your kid into the rowdiest part of the supporters section (or you can; it’s just not my thing to do so). You don’t want some dude feeling bad because he was pogoing and spilled beer all over your baby. YOU brought your baby there. Some people don’t want to deal with that; it’s nothing personal.

Sometimes your kiddo is just having a bad time, regardless if it’s their first match or their 15th. Rob and I have a mutual understanding that when The Boy is done, he’s DONE. No matter where we are at, we have an exit plan, and THANKFULLY it hasn’t happened at a Timbers match (for that, I will TAKE the Colic Baby!).

Granted, we don’t leave if he’s throwing a tantrum (no raising bratholes in this household!), but if he’s upset, chances are, one or two of the needs listed out in #3 are not being met. Hence why we try to be as prepared as possible.

Now, every time The Boy sees soccer on TV, he yells like he’s at Jeld-Wen. Such a proud moment, especially when he learns a chant on his own. 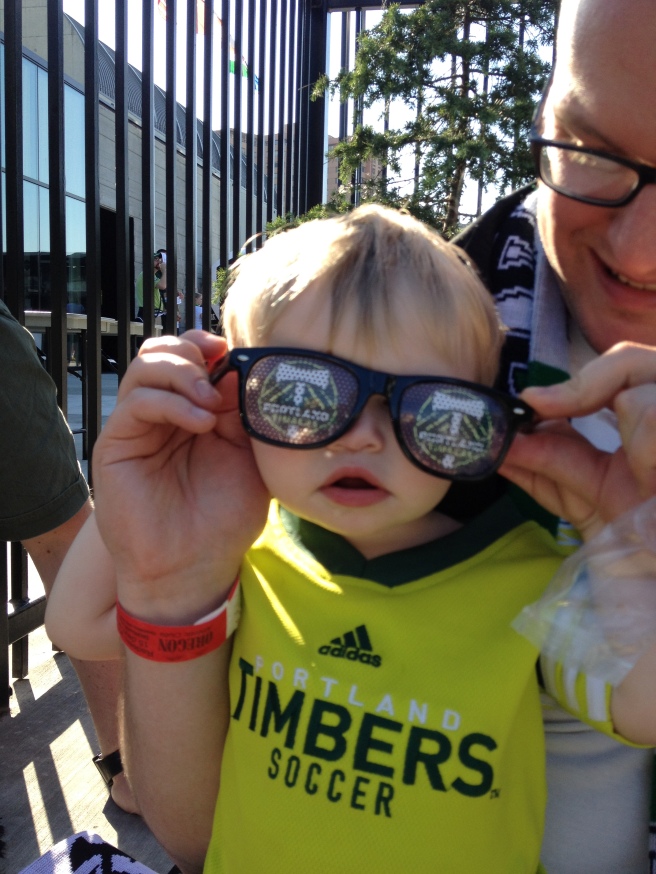 But does he sing the chant at the matches? Not yet.

Each year around Valentines Day, I bake sugar cookies (think of those soft and sugary Lofthouse cookies they sell at the grocery store, but way better), and I lovingly ice them and pipe snarky phrases on them.

Welp, my Anti-Valentines Day Sugar Cookies did not get baked this year.

Chalk it up to super crazy busy times in BOTH the ‘ol etsy shop and my ‘ol day job.

The day job threw the trump card yesterday with an all-day project that wouldn’t die until 7 ‘o clock last night.

Once I got home, did I bake? Did I work on some new goodies for the etsy shop?

I spent 45 minutes with my son, who I then put to bed at 8pm, and then I poured myself a glass of Wine By Joe Pinot Noir and sat on my ass with my husband.

While Rob and I don’t usually do anything for V-Day, last year was an exception, as we were getting adjusted to being three, since we were just a family of two for so many years.

So many years, in fact, that today marks our 10-year dating anniversary.

“Wait,” you say, “Your anniversary is ON Valentine’s Day, and yet you do NOTHING?”

You see, our dating origins don’t involve a first date at a romantic restaurant, or roses or chocolates of any kind.

Our dating origins involve a college Anti-Valentine’s Day party thrown by yours truly.

Was I embittered by some jerk who broke my heart? Did I Choo-Choo-Choose someone and they humiliated me on live television (sorry, I HAD to make that Simpsons reference!)?

No. It’s actually more sad than that.

When I was in high school, we had a family friend who committed suicide.

We will never really know why, but he left behind a wife, stepchildren, and a daughter who was still cooking in the oven.

It will affect me for the rest of my life.

Which really, really sucks, because I’m a firm believer that love can do far more powerful things than anything else in the world. I wish there was more love being shown everywhere. Love, compassion, you name it, it is magical and should not be taken for granted.

So while Rob and I approached our 10 years of awesomeness, I didn’t plan anything extravagant, but I did make this: It does the math: how many years, days, hours, minutes we’ve been together. All with a nifty 8-bit-looking font.

Baaaaah! I know, it’s SO sappy! Here’s the back: I felt the video game theme was very appropriate, as Rob and I are nerds, and he pretty much introduced this n00b to video games, as I was completely deprived as a child, unless I was at an overnighter at my aunt’s house, where we would OD on candy and soda, and play The Legend of Zelda on her SNES until 2am.

Those were magical times.

But it never honed my gaming skills, as I totally suck at video games. Rob and I spent a summer in Pullman while we were attending WSU, and we obtained an NES to pass the time (as we were in college and totally broke), and he kicked my ass playing Tetris multiple times. I get wistful from time to time about that summer.

But now I’m fatter, smarter, and richer (translation = less poor, and riddled with student loan debt), so who the hell cares!

Now to go make brinner (breakfast for dinner = best food ever!) for my two sweethearts with our heart-shaped waffle maker.

Crafty Underdog kicks off 2013 on February 10 at the Mission Theater here in Portland. 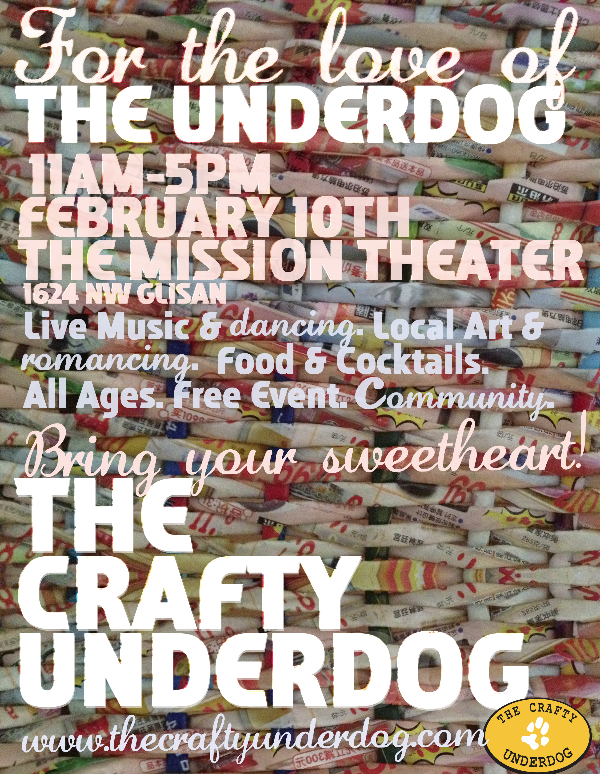 If you don’t come to see yours truly, at least come to grab a Ruby or a Greyhound (seriously, they have the best greyhounds in town…but this is coming from someone who no longer is able to get out regularly!), listen to some live music, and check out my fellow indie craft biz owners selling their awesome wares.